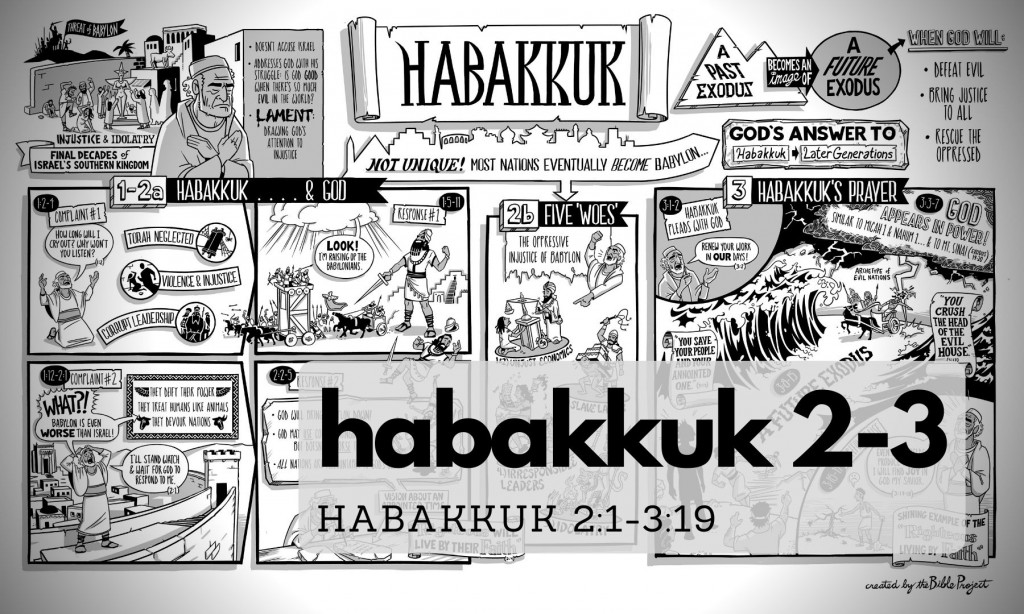 Join us as Jethro shares with us a message from the second and third chapters of the book of Habakkuk.

1 I will stand at my watch

and station myself on the ramparts;

I will look to see what he will say to me,

and what answer I am to give to this complaint.

2 Then the Lord replied:

‘Write down the revelation

and make it plain on tablets

so that a herald may run with it.

3 For the revelation awaits an appointed time;

it speaks of the end

and will not prove false.

Though it linger, wait for it;

it will certainly come

and will not delay.

his desires are not upright –

but the righteous person will live by his faithfulness –

he is arrogant and never at rest.

Because he is as greedy as the grave

he gathers to himself all the nations

and takes captive all the peoples.

6 ‘Will not all of them taunt him with ridicule and scorn, saying,

‘“Woe to him who piles up stolen goods

and makes himself wealthy by extortion!

How long must this go on?”

7 Will not your creditors suddenly arise?

Will they not wake up and make you tremble?

Then you will become their prey.

8 Because you have plundered many nations,

the peoples who are left will plunder you.

For you have shed human blood;

you have destroyed lands and cities and everyone in them.

9 ‘Woe to him who builds his house by unjust gain,

setting his nest on high

to escape the clutches of ruin!

10 You have plotted the ruin of many peoples,

shaming your own house and forfeiting your life.

11 The stones of the wall will cry out,

and the beams of the woodwork will echo it.

12 ‘Woe to him who builds a city with bloodshed

and establishes a town by injustice!

13 Has not the Lord Almighty determined

that the people’s labour is only fuel for the fire,

that the nations exhaust themselves for nothing?

as the waters cover the sea.

15 ‘Woe to him who gives drink to his neighbours,

pouring it from the wineskin till they are drunk,

so that he can gaze on their naked bodies!

16 You will be filled with shame instead of glory.

Now it is your turn! Drink and let your nakedness be exposed!

The cup from the Lord’s right hand is coming round to you,

and disgrace will cover your glory.

17 The violence you have done to Lebanon will overwhelm you,

and your destruction of animals will terrify you.

For you have shed human blood;

you have destroyed lands and cities and everyone in them.

18 ‘Of what value is an idol carved by a craftsman?

Or an image that teaches lies?

For the one who makes it trusts in his own creation;

he makes idols that cannot speak.

Or to lifeless stone, “Wake up!”

Can it give guidance?

It is covered with gold and silver;

there is no breath in it.’

20 The Lord is in his holy temple;

let all the earth be silent before him.

1 A prayer of Habakkuk the prophet.

2 Lord, I have heard of your fame;

I stand in awe of your deeds, Lord.

Repeat them in our day,

in our time make them known;

the Holy One from Mount Paran.

His glory covered the heavens

and his praise filled the earth.

rays flashed from his hand,

where his power was hidden.

5 Plague went before him;

6 He stood, and shook the earth;

he looked, and made the nations tremble.

and the age-old hills collapsed –

but he marches on for ever.

7 I saw the tents of Cushan in distress,

the dwellings of Midian in anguish.

8 Were you angry with the rivers, Lord?

Was your wrath against the streams?

Did you rage against the sea

when you rode your horses

and your chariots to victory?

9 You uncovered your bow,

you called for many arrows.

You split the earth with rivers;

Torrents of water swept by;

and lifted its waves on high.

11 Sun and moon stood still in the heavens

at the glint of your flying arrows,

at the lightning of your flashing spear.

12 In wrath you strode through the earth

and in anger you threshed the nations.

13 You came out to deliver your people,

to save your anointed one.

You crushed the leader of the land of wickedness,

you stripped him from head to foot.

14 With his own spear you pierced his head

when his warriors stormed out to scatter us,

gloating as though about to devour

the wretched who were in hiding.

15 You trampled the sea with your horses,

16 I heard and my heart pounded,

my lips quivered at the sound;

decay crept into my bones,

and my legs trembled.

Yet I will wait patiently for the day of calamity

to come on the nation invading us.

17 Though the fig-tree does not bud

and there are no grapes on the vines,

though the olive crop fails

and the fields produce no food,

though there are no sheep in the sheepfold

and no cattle in the stalls,

18 yet I will rejoice in the Lord,

I will be joyful in God my Saviour.

19 The Sovereign Lord is my strength;

he makes my feet like the feet of a deer,

he enables me to tread on the heights.

This week's Questions for Reflection are:

Join us as Jethro shares with us a message from the first chapter of the book of Habakkuk.